Wellington, FL – December 15, 2014 – Equestrian Sport Productions (ESP) hosted its Holiday Festival I this week on December 12-14, 2014, at the Palm Beach International Equestrian Center in Wellington, FL. The week featured the $10,000 Equiline Open Stake on Friday with a win for Amanda Derbyshire (GBR) and Goldbreaker and the $25,000 Equiline Holiday […]

Wellington, FL – December 15, 2014 – Equestrian Sport Productions (ESP) hosted its Holiday Festival I this week on December 12-14, 2014, at the Palm Beach International Equestrian Center in Wellington, FL. The week featured the $10,000 Equiline Open Stake on Friday with a win for Amanda Derbyshire (GBR) and Goldbreaker and the $25,000 Equiline Holiday I Grand Prix on Sunday with a win for Ian Millar (CAN) and Baranus.

Anthony D’Ambrosio of Red Hook, NY, set the courses in the International Arena for the Holiday I competition. In Sunday’s $25,000 Equiline Holiday I Grand Prix, D’Ambrosio saw 40 competitors over his first round track with ten clear to advance to the jump-off where six went double clear. Ian Millar and the Baranus were the winners by a margin of over four seconds with their time of 37.90 seconds. Kristen Vanderveen and Bull Run’s Testify finished second in 41.92 seconds, and Margie Engle and Eckham van het Steentje were third in 41.95 seconds. Alexander Zetterman and Zidane jumped into fourth place in 42.12 seconds. Millar, a ten-time Olympian for Canada, is no stranger to the winner’s circle, but he was particularly thrilled to be there this weekend with Baranus, a horse that he has been working with for two years.

“It has been a lot of development like anything else,” Millar said of the 10-year-old Oldenburg gelding (Balou du Rouet x Centauer Z). “It takes a long time to develop these horses and hopefully this is going to be his year where everything pays off and it starts to turn into results in the competition ring.”

“When I got him he looked like a fantastic prospect at that stage, and then it is all about the development,” Millar continued. “He has been consistent in his results. He has been learning his lessons. There is quite a list of lessons that they have to learn to be able to do this kind of thing. In the beginning he had his reservations about liverpools and water. That can take a long time to get a horse over that, and it did take awhile, but that seems to be behind us now.”

Commenting on his extremely fast jump-off round, Millar laughed, “I didn’t mean to be four seconds faster. That suggests that there is that much more risk and you only want to take enough risk to win, but I must say that I was concerned about the last one coming at me. Alexander Zetterman is a very, very fast rider, so I thought I better make it plenty difficult for him, which was the plan. I carried a lot of pace to jump one and with that much pace the inside turn was that much more challenging. If you went a little slower to number one the inside turn, although tight, was very manageable, but to do it at the speed I did was quite a trick. That was probably worth at least a second if not more. Then over the number ten jump I turned very quickly and came right back on the combination. That might have been worth another second, and then I never squared up to the second to last jump. I just came right through the corner and caught it and then finished up in the leave out, so that would have been another second.” 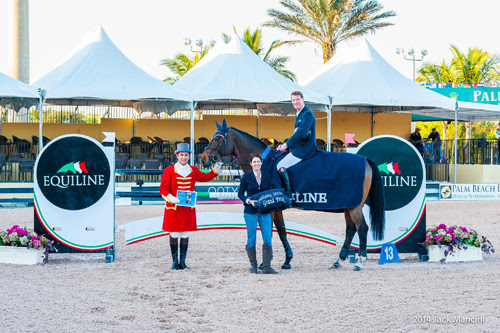 Ian Millar and Baranus in their winning presentation with Kelly Molinari of Equiline Photo By: Jack Mancini
The time that Millar has taken to bring Baranus along properly definitely paid off in the turns and the speed in that course, as the rider detailed, “He is beautiful to ride. It has taken awhile to get it, but he is such a cat that you can do anything you want with him. In that particular jump-off, there were a couple of areas that if you could keep coming through the tight turn it would save you some time. So many horses just don’t have the ability to come through at that speed, but he’s a cat.”

As the winter season approaches, Millar hopes to keep seeing improvement in Baranus and see how he does in the top classes.

“It is a long tour here, but we will see how far we can go because he absolutely is ready,” Millar stated. “There is nothing there to protect. His knowledge is there, his ability, his soundness, his fitness, it is all there. So I will go as far as I can go with him.”

Earlier in the week, the $10,000 Equiline Open Stake was held on Friday with a win for Amanda Derbyshire (GBR) and her own Goldbreaker. Thirty-four entries showed with 14-horse jump-off and eight double clear rounds. Derbyshire and Goldbreaker completed the fastest double clear in 42.74 seconds ahead of Tom Foley (IRL) and Spy Coast Farm LLC’s Beluga in 43.060 seconds. Alexander Zetterman (SWE) and Zidane finished third, just fractions off Foley’s time in 43.067 seconds.

I am a social media strategist and an avid equestrian, lucky enough to combine my passion with horses and a career in the world of Wellington. Happy to share my adventures in and around South Florida year round with everyone! Bringing paradise to your computer on a regular basis!